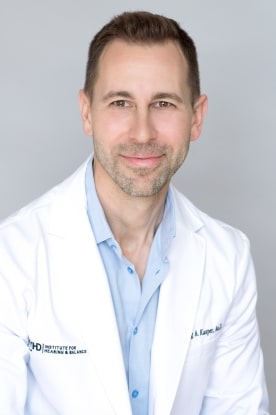 Dr. Craig Kasper is the Managing Director of NYHD. He specializes in disorders of the vestibular system and balance optimization. Recognized as one of the Future Leaders of Audiology by his colleagues and the American Academy of Audiology, Dr. Kasper has been at the front lines of public education and hearing/balance healthcare service for over 20 years. He completed his Doctorate of Audiology at the University of Florida and earned his master’s degree with clinical honors from the State University of New York at Buffalo. Dr. Kasper completed his Clinical Fellowship and served as a clinician in the Department of Otolaryngology/Head & Neck Surgery at New York-Presbyterian Medical Center. Dr. Kasper is a Fellow of the American Academy of Audiology (AAA) and holds the Certificate of Clinical Competence from the American Speech-Language and Hearing Association (ASHA). Dr. Kasper is a member of the American Balance Society and also earned certification in Performance Breathing from XPT.

He has contributed to scholarly articles that have been published in peer-reviewed journals, including Hearing Research and Laryngoscope. In addition to his professional publication history, he has written informative and educational health/scientific articles for the general public. Dr. Alexandra Zweig received her Bachelor of Arts degree in Speech-­Language­ & Hearing sciences from Hofstra University, where she was admitted into the Phi Beta Kappa Society for demonstrating excellence in the liberal arts and sciences.

She received her doctorate in audiology from the Long Island Au.D. Consortium, which is comprised of Hofstra, Adelphi, and St. John’s Universities. Her background also includes experiences at a well-respected otolaryngology practice, as well as the Brooklyn Veterans Affairs Hospital. She completed her clinical residency at NYHD | New York Hearing Doctors, where she is currently the Senior Audiologist.

Dr. Zweig was born and raised in New York City and her passion is improving the quality of life for hearing-impaired individuals of all ages. Dr. Ariella Naim received her Bachelor of Sciences in Communicative Sciences and Disorders from New York University, as well as her Doctorate of Audiology from the Long Island Doctor of Audiology Consortium, which consists of Hofstra University, Adelphi University, and St. John’s University.

At the start of her academic career, Dr. Naim volunteered at the New York Eye & Ear Infirmary, working closely with a team of audiologists, which led to discovering her passion for audiology. As part of her clinical preparation, Dr. Naim worked at The Center For Hearing & Balance Disorders at Lenox Hill Hospital, as well as a large otolaryngology practice.

Dr. Naim cares for patients of all ages. Her clinical interests include adult and pediatric diagnostics, adult amplification, hearing conservation, and tinnitus management.